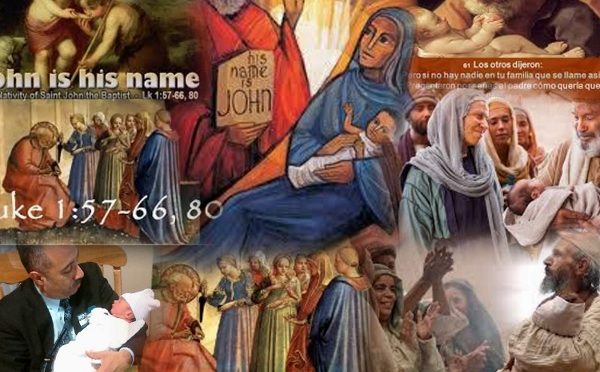 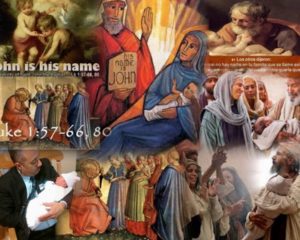 Elisabeth’s full time came /G\
Luke 1:57–80
57 Now Elisabeth’s full time came that she should be delivered; and she brought forth a son. 58 And her neighbours and her cousins heard how the Lord had shewed great mercy upon her; and they rejoiced with her. 59 And it came to pass, that on the eighth day they came to circumcise the child; and they called him Zacharias, after the name of his father. 60 And his mother answered and said, Not so; but he shall be called John. 61 And they said unto her, There is none of thy kindred that is called by this name. 62 And they made signs to his father, how he would have him called. 63 And he asked for a writing table, and wrote, saying, His name is John. And they marvelled all. 64 And his mouth was opened immediately, and his tongue loosed, and he spake, and praised God. 65 And fear came on all that dwelt round about them: and all these sayings were noised abroad throughout all the hill country of Judaea. 66 And all they that heard them laid them up in their hearts, saying, What manner of child shall this be! And the hand of the Lord was with him. 67 And his father Zacharias was filled with the Holy Ghost, and prophesied, saying,
68 Blessed be the Lord God of Israel;
For he hath visited and redeemed his people,
69 And hath raised up an horn of salvation for us
In the house of his servant David;
70 As he spake by the mouth of his holy prophets,
Which have been since the world began:
71 That we should be saved from our enemies,
And from the hand of all that hate us;
72 To perform the mercy promised to our fathers,
And to remember his holy covenant;
73 The oath which he sware to our father Abraham,
74 That he would grant unto us, that we being delivered out of the hand of our enemies
Might serve him without fear,
75 In holiness and righteousness before him,
All the days of our life.
76 And thou, child, shalt be called the prophet of the Highest:
For thou shalt go before the face of the Lord
To prepare his ways;
77 To give knowledge of salvation unto his people
By the remission of their sins,
78 Through the tender mercy of our God;
Whereby the dayspring from on high hath visited us,
79 To give light to them that sit in darkness and in the shadow of death,
To guide our feet into the way of peace.
80 And the child grew, and waxed strong in spirit, and was in the deserts till the day of his shewing unto Israel.

If you want to help