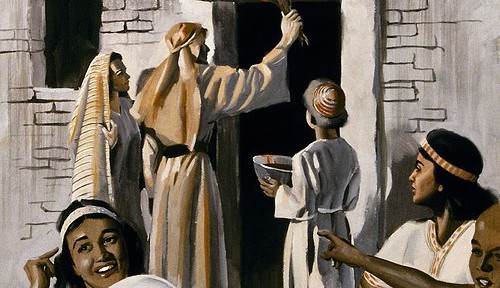 And the LORD spake unto Moses and Aaron in the land of Egypt, saying, 2 This month shall be unto you the beginning of months: it shall be the first month of the year to you. 3 Speak ye unto all the congregation of Israel, saying, In the tenth day of this month they shall take to them every man a lamb, according to the house of their fathers, a lamb for an house: 4 And if the household be too little for the lamb, let him and his neighbour next unto his house take it according to the number of the souls; every man according to his eating shall make your count for the lamb. 5 Your lamb shall be without blemish, a male of the first year: ye shall take it out from the sheep, or from the goats: 6 And ye shall keep it up until the fourteenth day of the same month: and the whole assembly of the congregation of Israel shall kill it in the evening. 7 And they shall take of the blood, and strike it on the two side posts and on the upper door post of the houses, wherein they shall eat it. 8 And they shall eat the flesh in that night, roast with fire, and unleavened bread; and with bitter herbs they shall eat it. 9 Eat not of it raw, nor sodden at all with water, but roast with fire; his head with his legs, and with the purtenance thereof. 10 And ye shall let nothing of it remain until the morning; and that which remaineth of it until the morning ye shall burn with fire. 11 And thus shall ye eat it; with your loins girded, your shoes on your feet, and your staff in your hand; and ye shall eat it in haste: it is the LORD’s passover. 12 For I will pass through the land of Egypt this night, and will smite all the firstborn in the land of Egypt, both man and beast; and against all the gods of Egypt I will execute judgment: I am the LORD. 13 And the blood shall be to you for a token upon the houses where ye are: and when I see the blood, I will pass over you, and the plague shall not be upon you to destroy you, when I smite the land of Egypt.

“CORRECTING wrong # numbers of victims or dead on the plane crash in Germany, I share 120 dead but there were actually 149 dead victims.
Apology for my mistake.”
Rev Angel de Jesus

Multitudes, multitudes in the valley of decision: for the day of the LORD is near in the valley of decision. 15 The sun and the moon shall be darkened, and the stars shall withdraw their shining. 16 The LORD also shall roar out of Zion, and utter his voice from Jerusalem; and the heavens and the earth shall shake: but the LORD will be the hope of his people, and the strength of the children of Israel. 17 So shall ye know that I am the LORD your God dwelling in Zion, my holy mountain: then shall Jerusalem be holy, and there shall no strangers pass through her any more. 18 And it shall come to pass in that day, that the mountains shall drop down new wine, and the hills shall flow with milk, and all the rivers of Judah shall flow with waters, and a fountain shall come forth of the house of the LORD, and shall water the valley of Shittim. 19 Egypt shall be a desolation, and Edom shall be a desolate wilderness, for the violence against the children of Judah, because they have shed innocent blood in their land. 20 But Judah shall dwell for ever, and Jerusalem from generation to generation. 21 For I will cleanse their blood that I have not cleansed: for the LORD dwelleth in Zion.

And shall go out to deceive the nations which are in the four quarters of the earth, Gog and Magog, to gather them together to battle: the number of whom is as the sand of the sea. 9 And they went up on the breadth of the earth, and compassed the camp of the saints about, and the beloved city: and fire came down from God out of heaven, and devoured them. 10 And the devil that deceived them was cast into the lake of fire and brimstone, where the beast and the false prophet are, and shall be tormented day and night for ever and ever. 11 And I saw a great white throne, and him that sat on it, from whose face the earth and the heaven fled away; and there was found no place for them. 12 And I saw the dead, small and great, stand before God; and the books were opened: and another book was opened, which is the book of life: and the dead were judged out of those things which were written in the books, according to their works. 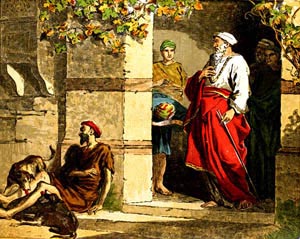 There was a certain rich man, which was clothed in purple and fine linen, and fared sumptuously every day: 20 And there was a certain beggar named Lazarus, which was laid at his gate, full of sores, 21 And desiring to be fed with the crumbs which fell from the rich man’s table: moreover the dogs came and licked his sores. 22 And it came to pass, that the beggar died, and was carried by the angels into Abraham’s bosom: the rich man also died, and was buried; 23 And in hell he lift up his eyes, being in torments, and seeth Abraham afar off, and Lazarus in his bosom. 24 And he cried and said, Father Abraham, have mercy on me, and send Lazarus, that he may dip the tip of his finger in water, and cool my tongue; for I am tormented in this flame. 25 But Abraham said, Son, remember that thou in thy lifetime receivedst thy good things, and likewise Lazarus evil things: but now he is comforted, and thou art tormented. 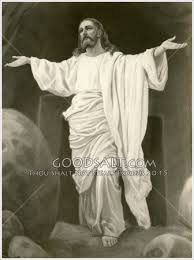 Then Martha, as soon as she heard that Jesus was coming, went and met him: but Mary sat still in the house. 21 Then said Martha unto Jesus, Lord, if thou hadst been here, my brother had not died. 22 But I know, that even now, whatsoever thou wilt ask of God, God will give it thee. 23 Jesus saith unto her, Thy brother shall rise again. 24 Martha saith unto him, I know that he shall rise again in the resurrection at the last day. 25 Jesus said unto her, I am the resurrection, and the life: he that believeth in me, though he were dead, yet shall he live: 26 And whosoever liveth and believeth in me shall never die. Believest thou this? 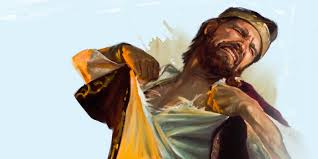 And Hilkiah the high priest said unto Shaphan the scribe, I have found the book of the law in the house of the LORD. And Hilkiah gave the book to Shaphan, and he read it. 9 And Shaphan the scribe came to the king, and brought the king word again, and said, Thy servants have gathered the money that was found in the house, and have delivered it into the hand of them that do the work, that have the oversight of the house of the LORD. 10 And Shaphan the scribe shewed the king, saying, Hilkiah the priest hath delivered me a book. And Shaphan read it before the king. 11 And it came to pass, when the king had heard the words of the book of the law, that he rent his clothes.

But when Esther came before the king, he commanded by letters that his wicked device, which he devised against the Jews, should return upon his own head, and that he and his sons should be hanged on the gallows. 26 Wherefore they called these days Purim after the name of Pur. Therefore for all the words of this letter, and of that which they had seen concerning this matter, and which had come unto them, 27 The Jews ordained, and took upon them, and upon their seed, and upon all such as joined themselves unto them, so as it should not fail, that they would keep these two days according to their writing, and according to their appointed time every year; 28 And that these days should be remembered and kept throughout every generation, every family, every province, and every city; and that these days of Purim should not fail from among the Jews, nor the memorial of them perish from their seed. 29 Then Esther the queen, the daughter of Abihail, and Mordecai the Jew, wrote with all authority, to confirm this second letter of Purim. 30 And he sent the letters unto all the Jews, to the hundred twenty and seven provinces of the kingdom of Ahasuerus, with words of peace and truth, 31 To confirm these days of Purim in their times appointed, according as Mordecai the Jew and Esther the queen had enjoined them, and as they had decreed for themselves and for their seed, the matters of the fastings and their cry. 32 And the decree of Esther confirmed these matters of Purim; and it was written in the book. 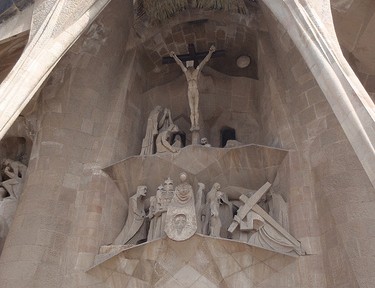 So also is the resurrection of the dead. It is sown in corruption; it is raised in incorruption: 43 It is sown in dishonour; it is raised in glory: it is sown in weakness; it is raised in power: 44 It is sown a natural body; it is raised a spiritual body. There is a natural body, and there is a spiritual body. 45 And so it is written, The first man Adam was made a living soul; the last Adam was made a quickening spirit. 46 Howbeit that was not first which is spiritual, but that which is natural; and afterward that which is spiritual. 47 The first man is of the earth, earthy: the second man is the Lord from heaven. 48 As is the earthy, such are they also that are earthy: and as is the heavenly, such are they also that are heavenly. 49 And as we have borne the image of the earthy, we shall also bear the image of the heavenly.